On this virtual voyage through the USA, learn how the country originated in a revolution and grew to be the world’s foremost economic power.

Scuba Dive California’s Channel Islands
Ever been SCUBA diving? Did you know off the Coast of California, the kelp forests are home to over 700 marine species? It is one of the most amazing places to spot different animals both above and below the surface.

Paddling Though the Heart of the Grand Canyon
To paddle the Grand Canyon is the equivalent of summiting Mt. Kilimanjaro in Tanzania or spending three weeks in the wilderness of rural Laos—a challenge for mind, body, and heart.

Hawaiian Roots: Surf History
Did you know big wave surfing originated in Hawai’i? Kings and queens were the only ones allowed to surf back in the day, but now this cultural activity it is a world renowned, adrenaline pumping sport for many

How America Became a Superpower
In this short video, see how America grew from a colony to a world superpower in 200 years.

A Community of Refugees in New Orleans East
Learn about the Vietnamese people who live in New Orleans. Why they left Vietnam and came to the United States, and what their lives are like now.

Rustic in the USA 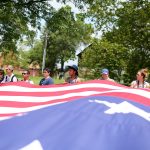 Rustic Programs in the USA

All American Apple Pie
“What’s more American than apple pie?” You can expect a giant scope of vanilla ice cream right next a steaming slice. Take a shot at making this cinnamon apple delight at home with your family.

Louisiana’s Best-Kept Culinary Secret
For the last 40 years Alzina Toups  has been cooking some fo the world’s greatest Cajun cuisine in her humble restaurant.

The Evolution of American Barbecue
An article by Smithsonian covering how barbecue traditions grew from Caribbean roots to the four main styles we see today: Memphis, Tenn.; North Carolina; Kansas City; and Texas.

Cadillac Desert: The American West and Its Disappearing Water
A classic covering water history and issues in Western USA – from settlers lured to the arid West to the controversy surrounding water projects and dams.

Rising Tide: The Great Mississippi Flood of 1927 and How it Changed America
The Mississippi flood of 1927 was one of the greatest natural disasters America has ever seen, transforming politics and society forever.

Jazz in New Orleans
The birthplace of Jazz, Louisiana is rich in history of music and dance. Discover history, musicians and the best places to hear jazz music here.